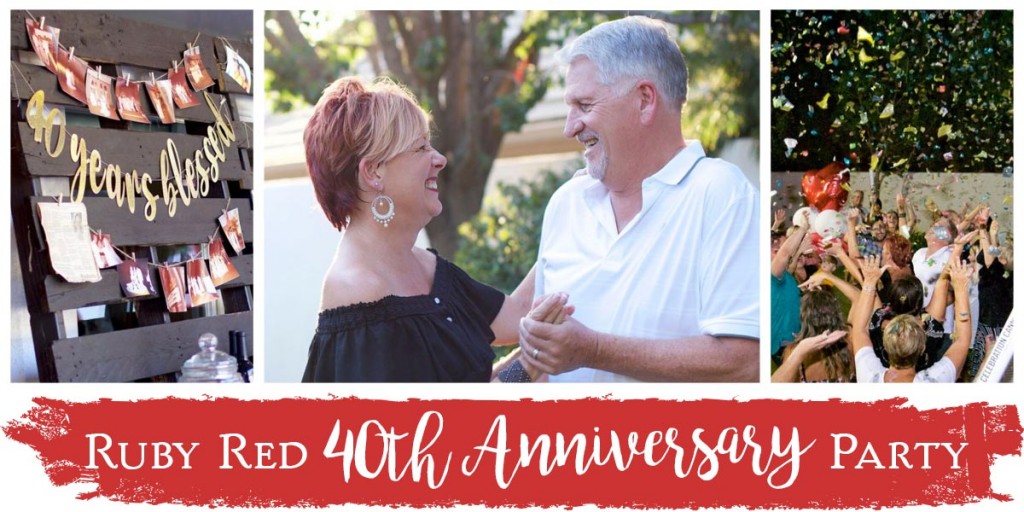 When we feature customer stories we are typically looking at the beginning of “happily ever after,” whether that is a wedding or a gender reveal party. Today, we’re taking a look at a couple who celebrated 40 years of marriage with a knock down anniversary party. This party was especially fun for me as the couple happens to be my fabulous in-laws! So allow me to introduce you to two of my favorite people in the world, Jack and Leann. 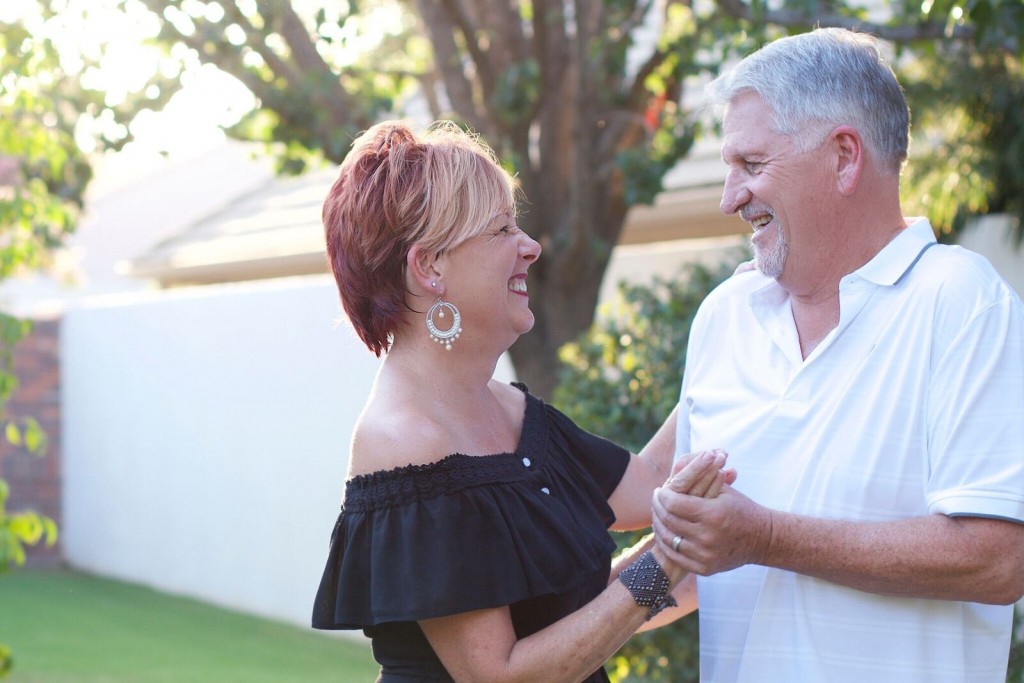 It was at St. Francis Elementary School in Bakersfield, CA. Amidst nuns and uniforms, something magical happened. He was in third grade, she in second. He saw that vibrant, smiling blonde and vowed he fell in nine-year-old love. But before either one could act on the crush, she was gone.

They met again in college, and after two weeks of dating he asked her to marry him. Nine months later, on August 18, 1978, they tied the knot. 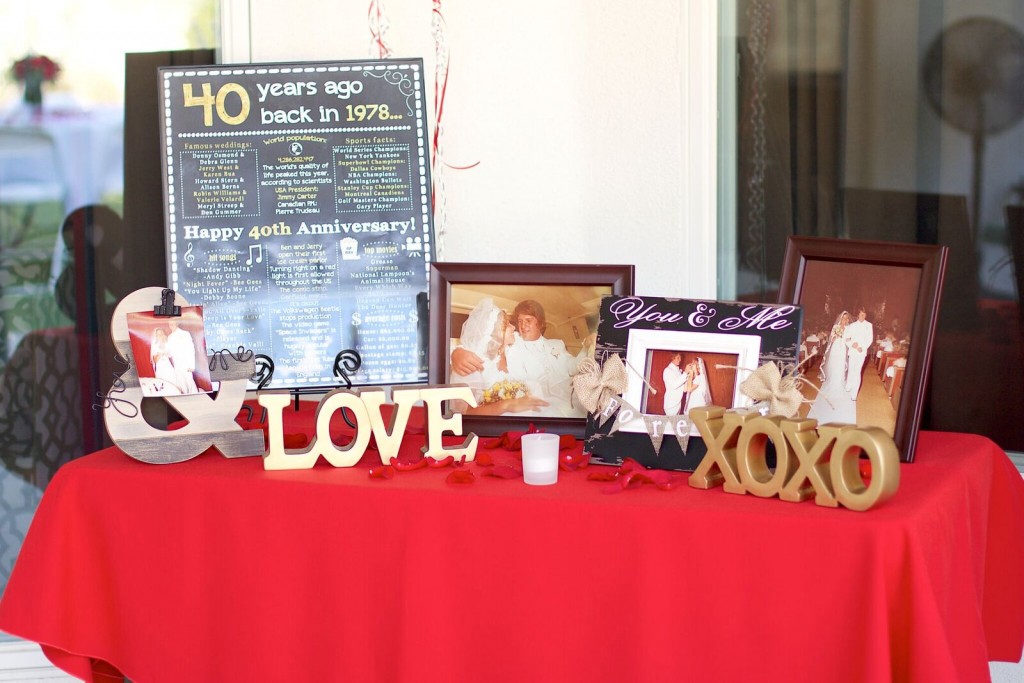 Forty years, two kids, and five grandkids later they are still caught up in their whirlwind romance. 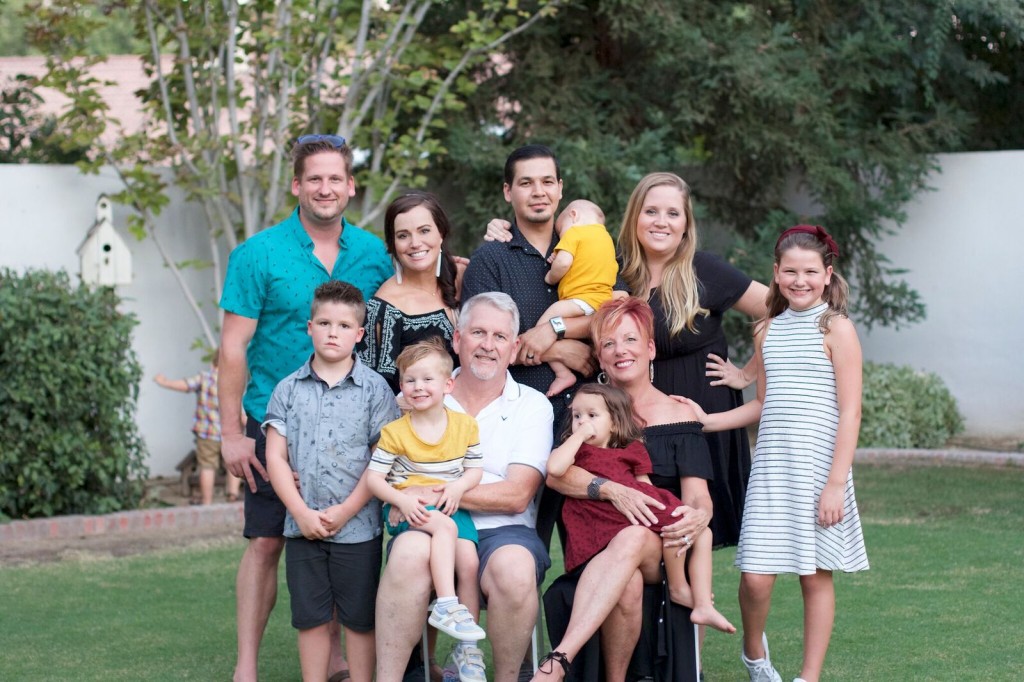 Pardon the scowling child. He is my son 😉

Most folks describe marriage as a 50/50 relationship. Both parties meet halfway, and it’s in the middle where the magic happens. This isn’t true for Jack and Leann. This couple shows up with a 100% on each side. They are completely invested in each other’s outcome, and that’s why we had to celebrate their beautiful marriage with a truly epic party.

Leann’s parents, Maryann and Jerry–known to all as Nama and Pop–have a great, big backyard that is used by the family for every holiday and event. Even with Bakersfield’s notorious August heat, we managed to power through and have a blast outside. Heat hack: we rented a few gigantic fans to help offset the heat. Leann’s daughter, also named Maryanne, was in charge of the decorations and she did a stellar job. The color/symbol for a 40th wedding anniversary is “Ruby Red.” We had fun incorporating what happens to be one of Leann’s favorite colors. Using repurposed pallets, Maryanne made a photo display to highlight different milestones in their marriage. 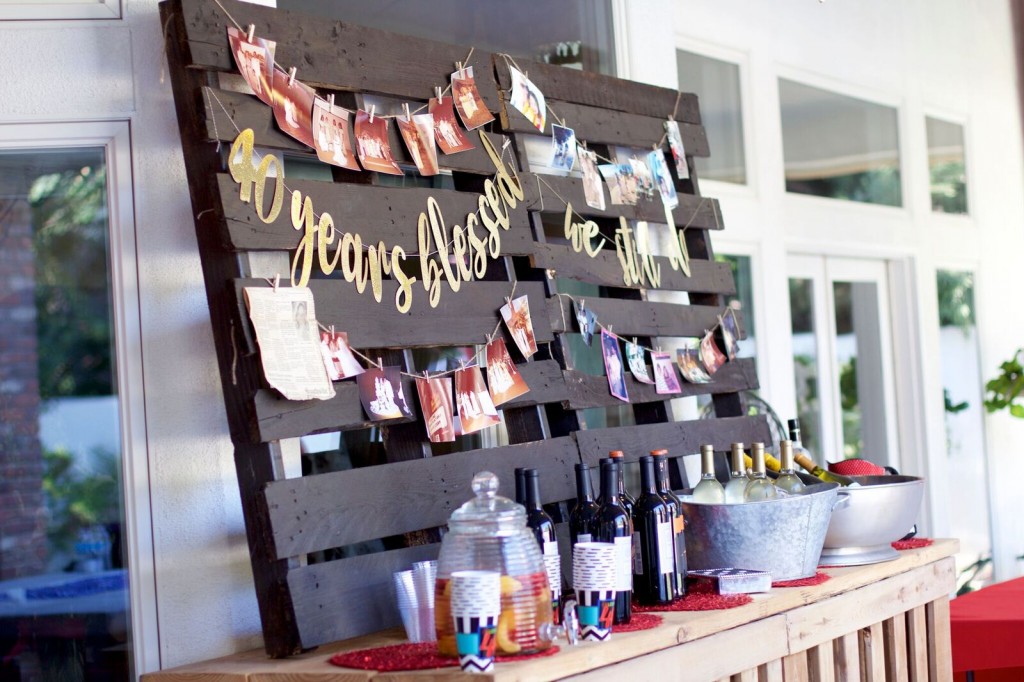 Balloon creations by Paradise Balloons were set up all over the yard for ambiance. What was so wonderful about this company is they brought everything in, set it up, and came the next morning to clear them away. If you’re planning a party and want instant ambiance, I highly recommend you find a company like Paradise Balloons. 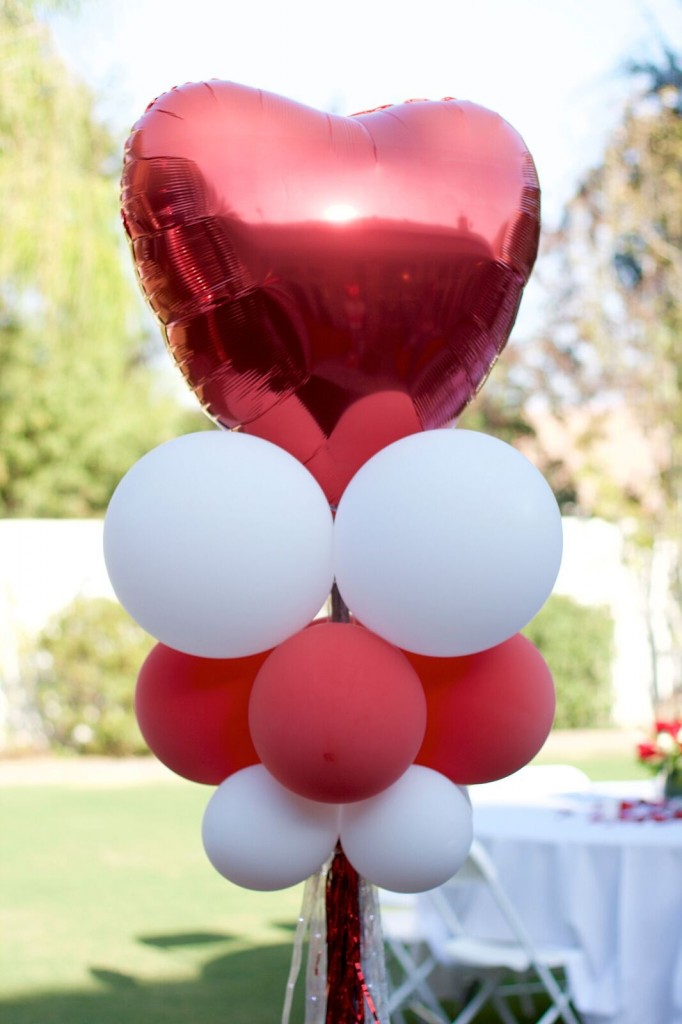 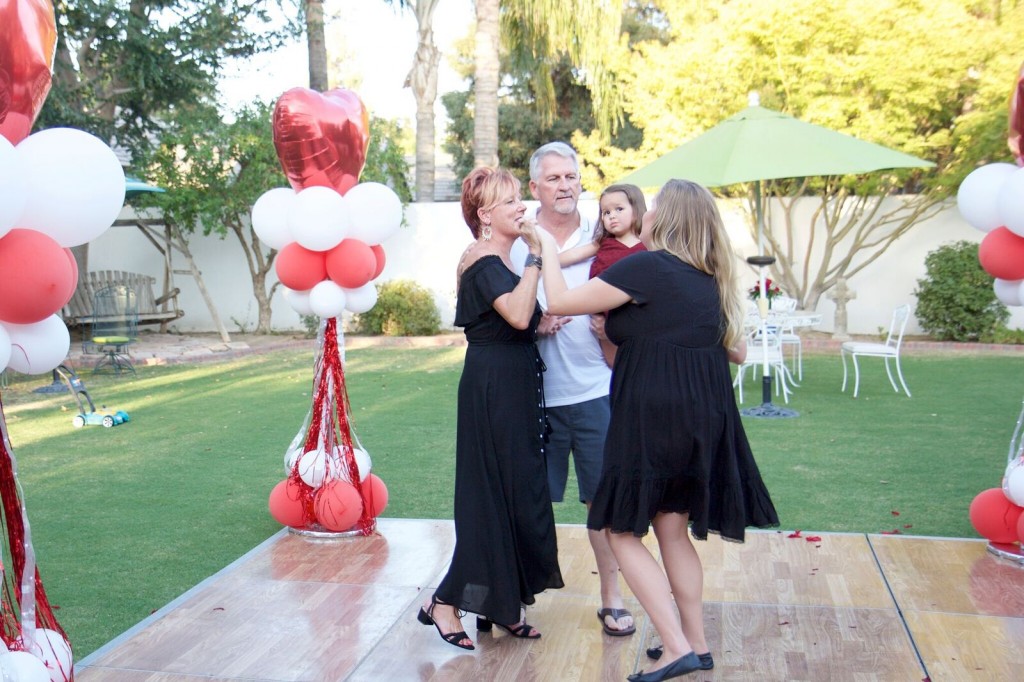 We kept it simple and actually purchased centerpieces from the local Vons grocery store. They did a fantastic job. It’s nice to know you don’t have to secure a high-end florist to get beautiful results. While I’m a huge fan of said high-end florists, the budget doesn’t always allow for them. So if you’re looking for floral options, keep in mind that grocery store florists can be a great resource! 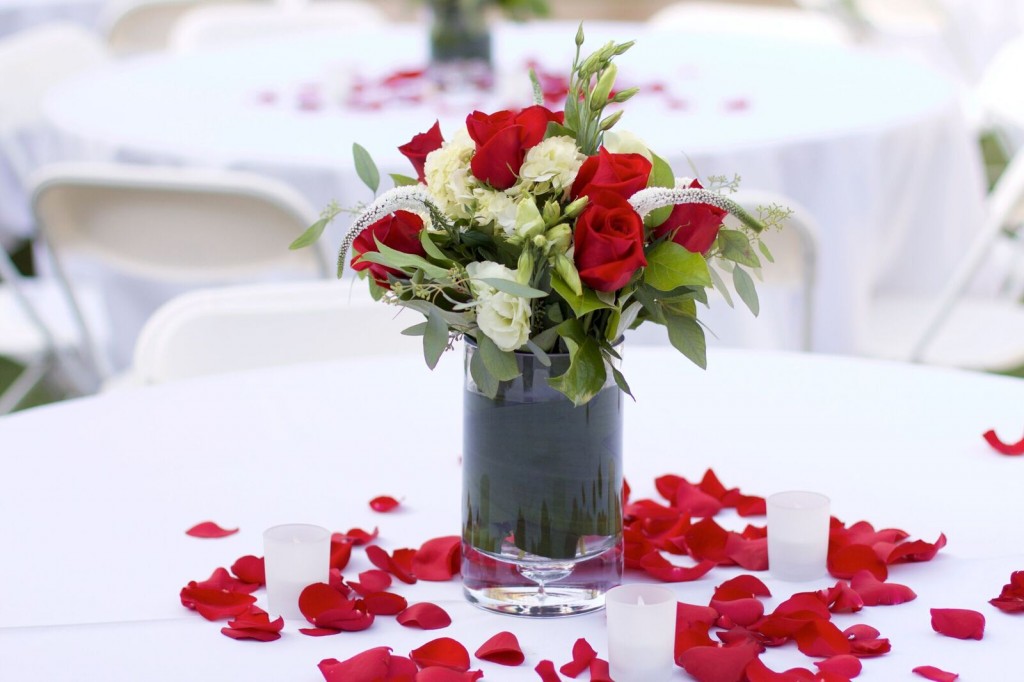 If there is one thing you want to splurge on at any party, it’s the food. We secured catering from three of Bakersfield’s best restaurants. Like I said, we splurged. Leann and Jack’s kids and spouses were in charge of serving. That said, I did not get to enjoy eating until around 10 PM, and even so Jake’s Tex Mex was heaven. 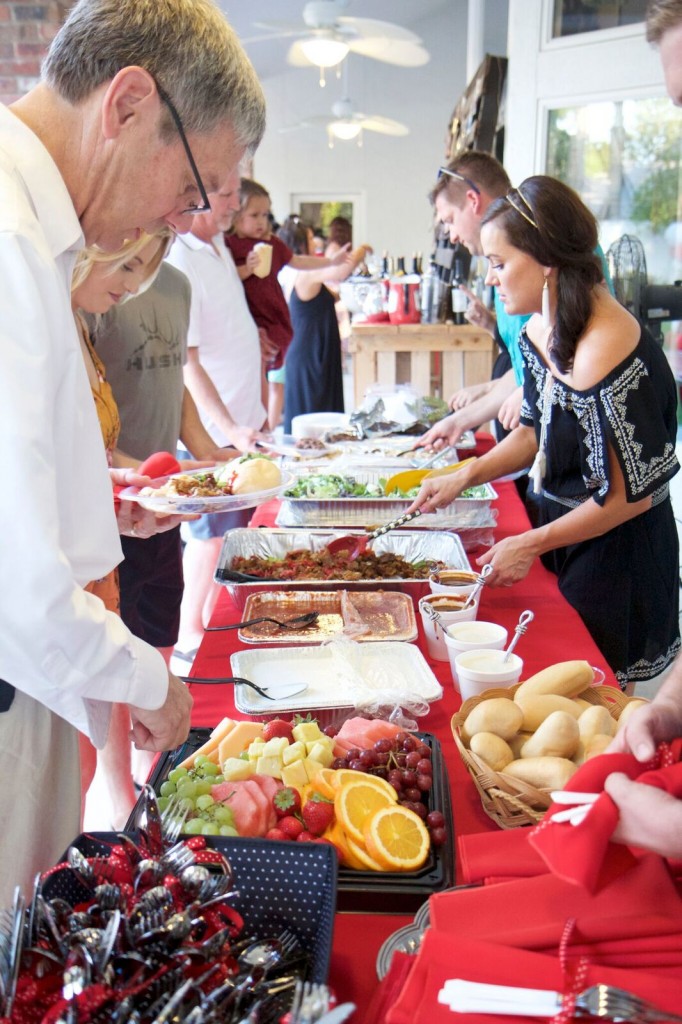 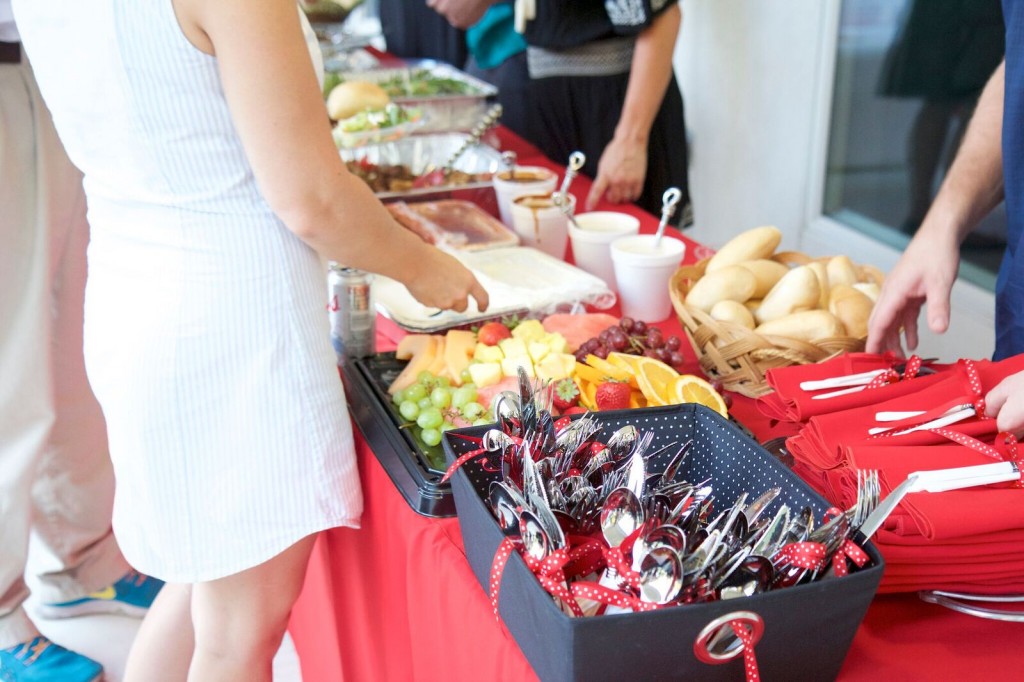 Jack, ever the constant Grandpa, enjoyed his meal with his youngest grandson, Ezra, on his lap. Leann, always the life of a party, probably didn’t take time away from the dance floor to actually eat. 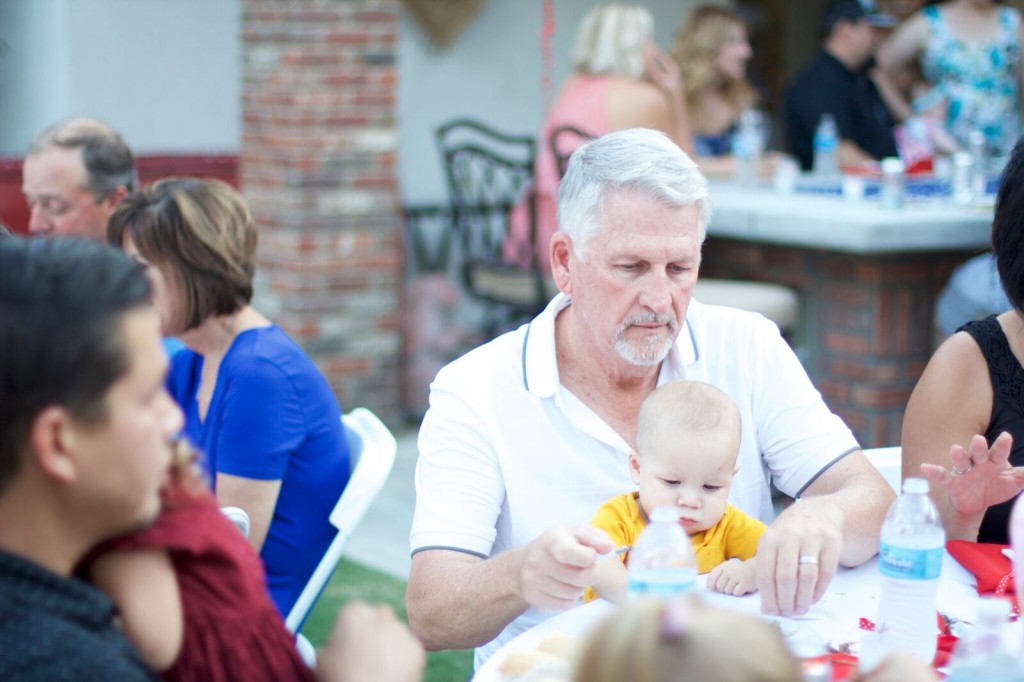 My one culinary contribution was this Sparkling White Peach Sangria. My husband voiced his doubts, “peach??” But yes, after finding the recipe on Pinterest it will now be my go-to beverage to bring to parties. 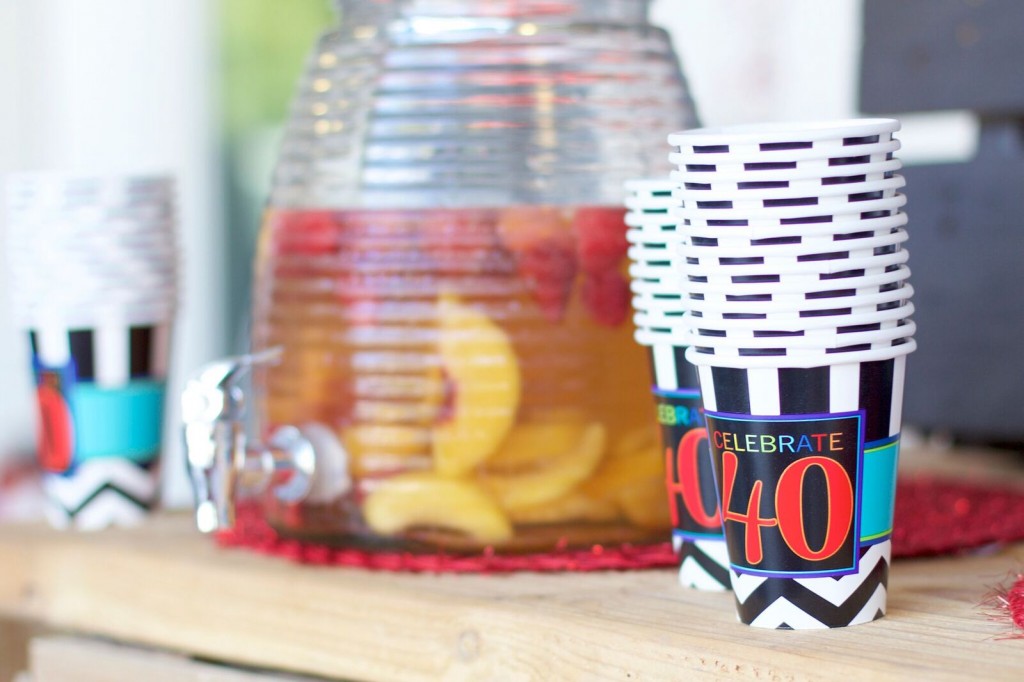 Beyond eating, toasting, and kids running amok, the best part of the evening was the dancing. Somehow, we managed to book the most sought-after DJ in Bakersfield. I have never seen someone quite like DJ Donald. He manages to get every last guest out there on the dance floor and even choreographs dances throughout the night. 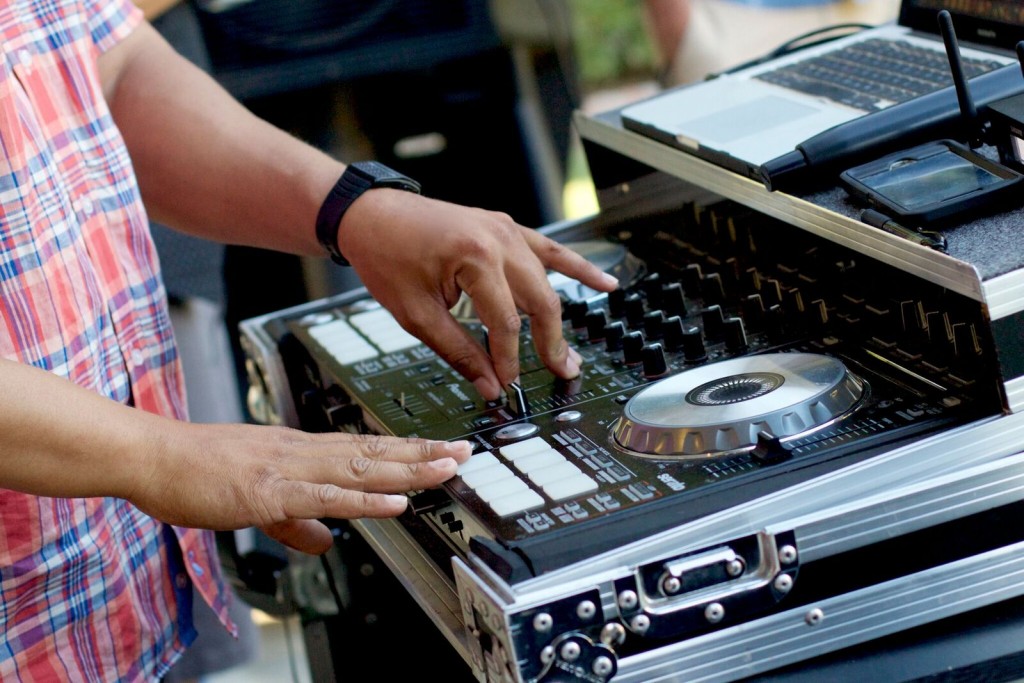 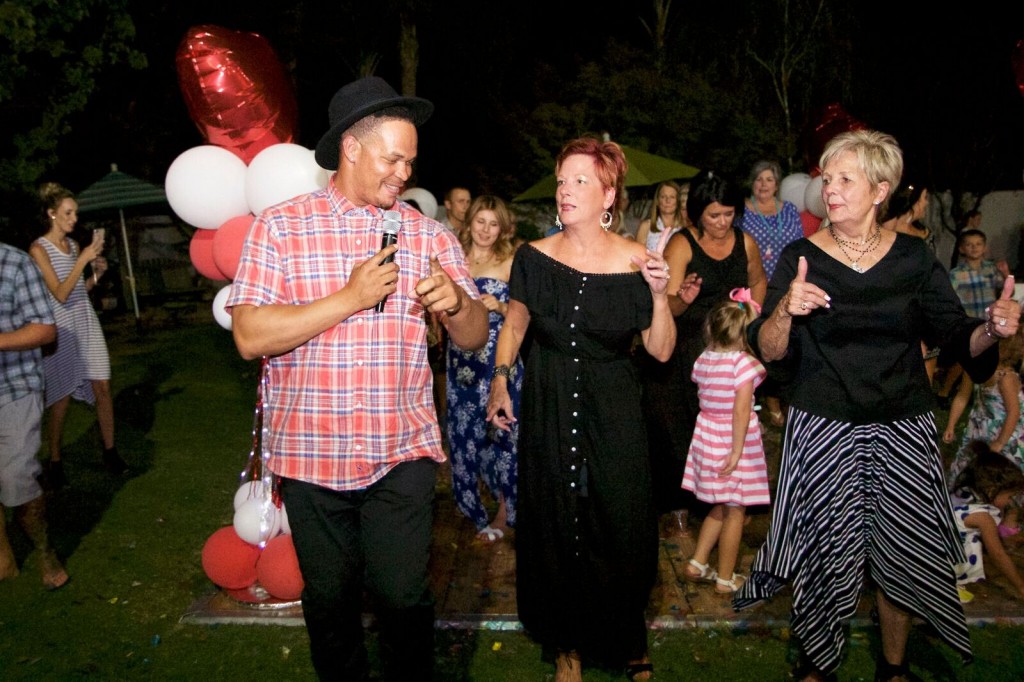 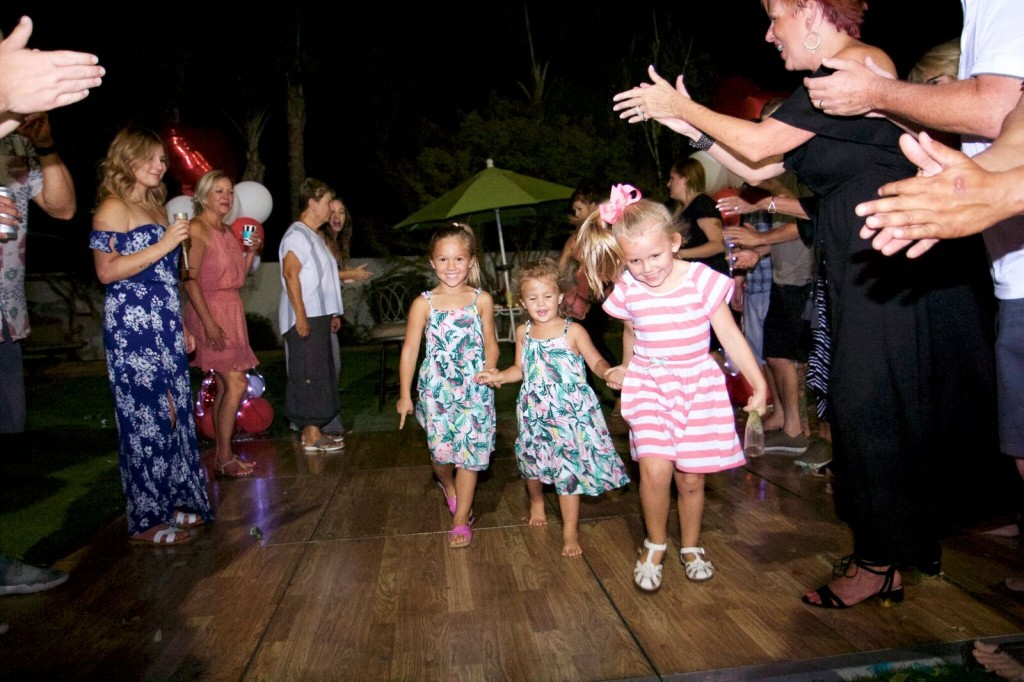 Of course, working for a company like Superior Celebrations, I knew without a doubt we needed confetti cannons. As it was a surprise for everyone, it happened to be quite the feat to coordinate. I left my husband, Matt, in charge of the ten cannons and he now believes he has a future in event productions. {Insert eye roll}. 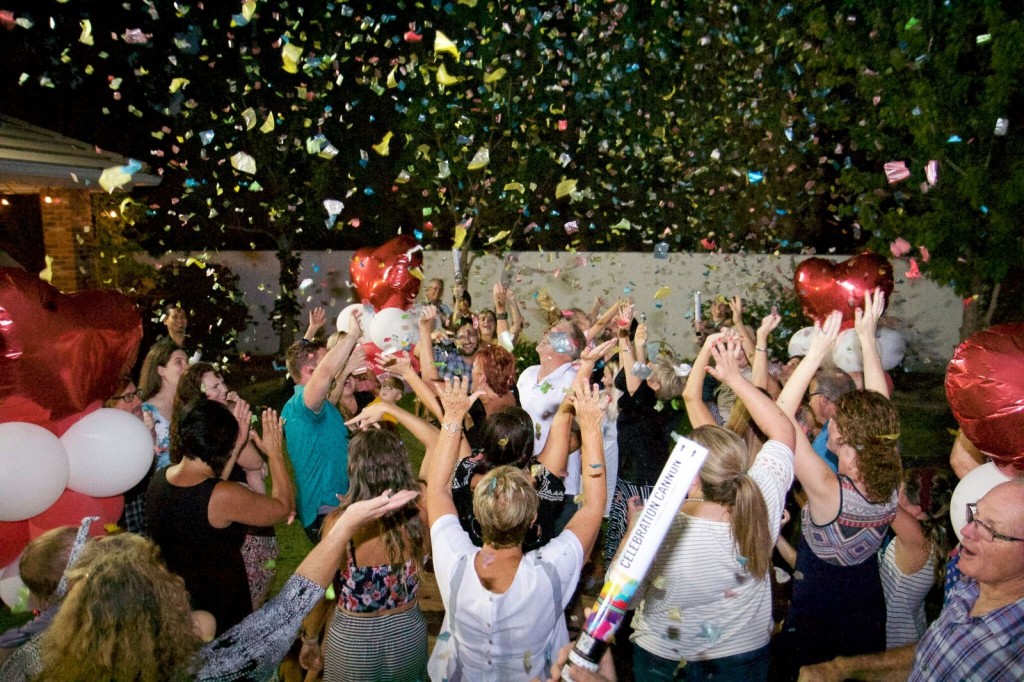 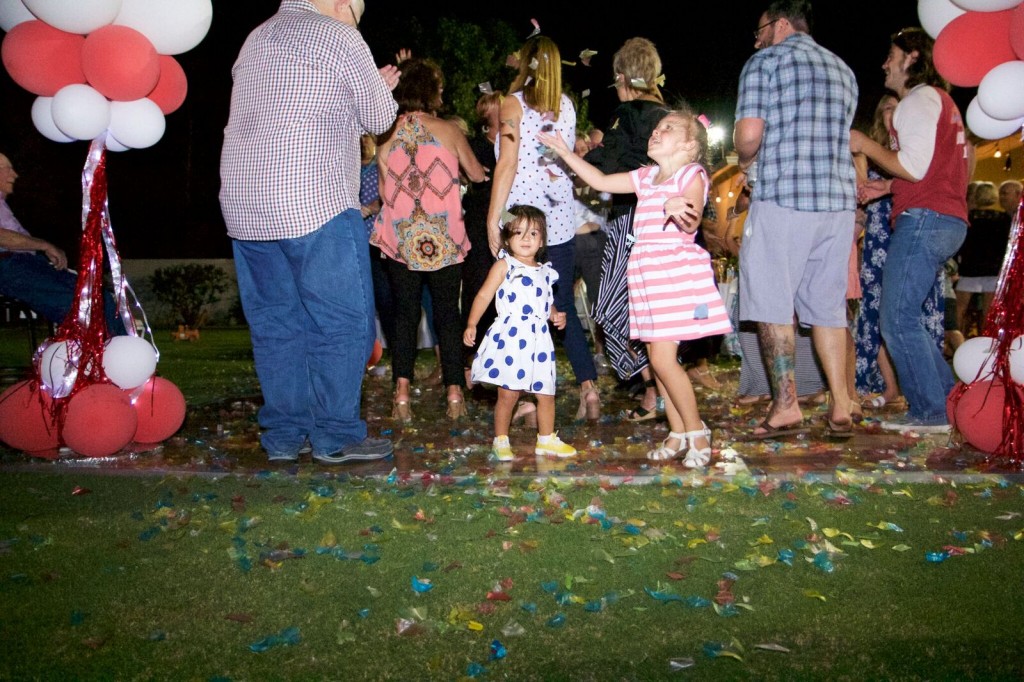 When the confetti went off, everyone was screaming and jumping around. It was absolutely magical and I had at least fifteen different people tell me it MADE the evening. I can now say without any bias that confetti cannons enhance every event. We used the biodegradable Multicolored Wedding Confetti for easy clean up.

Overall, it was like attending the very best wedding reception: good food, good friends, and great dancing. It was a blast to celebrate two people who work at keeping their marriage strong, and make the world better just by being together.

A huge shoutout to Keri, from Keriography.com for capturing all the photos from this wonderful event. Follow her on Instagram to see her fabulous work.